SPECTROELECTROCHEMICAL STUDIES OF THE Tc(VII) REDUCTION IN AQUEOUS ELECTROLYTE MEDIA

99Tc, a weak β-particle-emitter with a half-life of 2.13×105 years, is a strongly relevant fission product. Under repository conditions it has two main oxidation states: Tc(VII), as pertechnetate TcO4-, a highly water-soluble anion not significantly sorbed on minerals or sediments, and Tc(IV), mostly found as TcO2, a solid with a low solubility product and, thus, a lower mobility [1].

However, in 2004 Lukens et. al. [2] reported the existence of non-pertechnetate species in the Hanford waste tanks and identified them as Tc(I) – carbonyl complexes. In further reports of the Pacific Northwest National Laboratory [3–7] the synthesis of Tc(I) carbonyl and nitrosyl complexes, relevant to the Hanford Site and their characterization by XAS and NMR is fully explained. More recently, Chatterjee et. al. [8] succeeded to stabilize Tc(VI) species to study them by spectroscopic methods (UV-vis, EPR and XPS). These works show the importance of extending the current knowledge of Tc fundamental chemistry and the need for more thermodynamic information on low-valent Tc oxidation states in order to determine the reduction mechanism from Tc(VII) to Tc(IV), which is not yet fully understood.

As a first approach, we have studied the reduction of 1 mM Tc(VII) in 1M HNO3 by applying a series of negative potentials (from -100 to -500 mV) to the solution for 30 minutes each. After this time, an aliquot was taken to measure the UV-vis spectra, as shown in figure 1. Additionally, after applying            -550 mV, the solution was sealed and left at rest for 24 hours to evaluate the stability of the product formed. 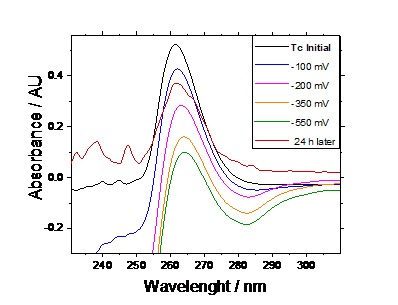 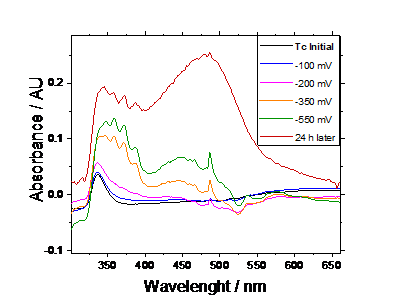 Figure 1-A shows a peak around 265 nm that corresponds to Tc(VII) [9,10]. The intensity of the band decreases with decreasing the potential, which implies that Tc(VII) concentration in solution decreases due to its reduction, as expected for low potential values. The spectra of the solution after 24 hours shows that Tc(VII) is formed again, although the initial concentration is not reached.

Figure 1-B shows two signals that may correspond to the formation of other Tc oxidation states. According to Alliot et. al. [10], the peak around 500 nm could be assigned to the Tc(IV) formation, although it would not fully explain the increase of the signal 24 hours after the experiment. On the other hand, the three peaks formed around 370 nm after V = -350 mV most probably account for the reduction of the nitric acid, as they maintain their shape after 24 hours and, if they were non common Tc species like Tc(V) or Tc(VI), they should have disproportionated to Tc(VII) in a short time.

Even though these results are very interesting, it is necessary to combine spectroscopic and electrochemical methods and to carry out the measurements at the same time in order to obtain a clear understanding on the reduction. Moreover, in order to avoid the uncertainty due to the reaction of the electrolyte, a systematic selection of anions and cations must be done. Therefore, we have studied the reduction of Tc(VII) in 1 M of aqueous sodium nitrate (NaNO3), sodium perchlorate (NaClO4), sodium bicarbonate (NaHCO3) and sodium chloride (NaCl) by cyclic voltammetry and differential pulse voltammetry coupled with UV – vis.

This work has been developed in the frame of VESPA II project (02E11607B), supported by the German Federal Ministry for Economic Affairs and Energy (BMWi).