The project VESPA 1 was a joint research project of GRS, HZDR, KIT and Forschungszentrum Jülich. VESPA I was running from July 2010 - June 2014.

The project dealt with the chemical-physical properties of long-lived fission and activation products (14C, 79Se, 99Tc, 129I und 135Cs) in the near-field of a repository for radioactive waste. Thermodynamic models were developed for selenite, selenate, iodide, and cesium. They reliably allow the prediction of ion activity coefficients in relevant salt solutions in the temperature range from 25 to 90°C. In addition, for selenite and selenate new solubility limits were derived for relevant solution systems.

The redox chemistry of technetium was investigated in diluted as well as in highly saline solutions. For the first time, a thermodynamic model could be developed that describes the retention of Tc(IV) on the basis of the SIT and the Pitzer model. This lead to an evaluation of Tc retention on iron oxides and of reduction kinetics of Tc(VIII) in natural systems.

The sorption of selenium on iron corrosion phases and clay minerals was examined dependent on its oxidation state. Other retention mechanisms that were found to play a prominent role included the incorporation in iron sulfides and calcite.

Furthermore, analytical activities were undertaken for a better understanding of the 14C source term in highly radioactive materials. The retention of mobile fission products by layered double hydroxides (LDH) was investigated in another part of the project. For the first time, three synthesized mixed crystal systems (Mg-Al-LDH, partly substituted by Fe, Co, or Ni) were tested.

For a simplified repository system, the migration of radionuclides was calculated without and with the newly derived thermodynamic data. The results show that the gain of knowledge within the project lead to a reduction of modelled radionuclide release. The figure below illustrates that the release of 99Tc and 79Se of a generic repository can be lesser by several orders of magnitude if the solubility limits and sorption coefficients developed in VESPA 1 will be used. 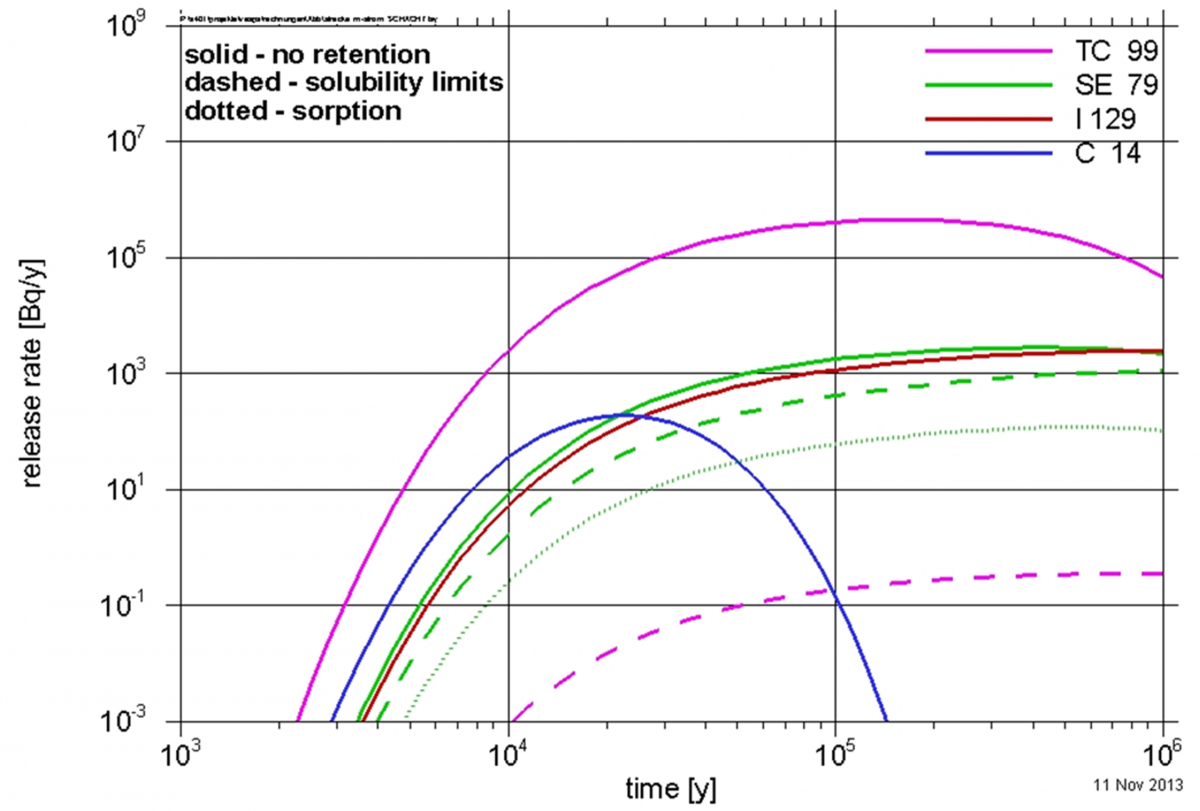 The report of the project VESPA 1 can here be downloaded.